Tunisia has variable climate with a highly arid region in the south while the northern part of the country is humid. This creates a diversity of Tunisian flora which includes more than 2000 species.

These plant resources include rosemary that stretches out across the center of the country for 350.000 hectares. We find rosemary mainly undergrowth, in pine forest and in the garrigue at open-air.

The plantations of myrtle are estimated at 40.000 hectares in the northwest mainly in the oak forests and in the maquis.

Finally, the key aromatic raw material of Tunisia known as bitter orange, is grown in the region of Cap Bon, in the north east of Tunisia. The total area under cultivation is 400 hectares.

The bitter orange is an orange tree (Citrus aurantium L. ssp amara ) with bitter fruits introduced in Tunisia at the end of the 19th century. Because of its numerous virtues, all parts of the plant are used: flowers, branches, leaves and fruits.

Its floral water which naturally smoothes and softens is called “Zhar” which means “luck” in Tunisian dialect. During spring, its fragrance perfumes the houses and the streets.

In order to control a part of our sourcing, we have recently started to set up our own plantations reaching today about 40 hectares.. 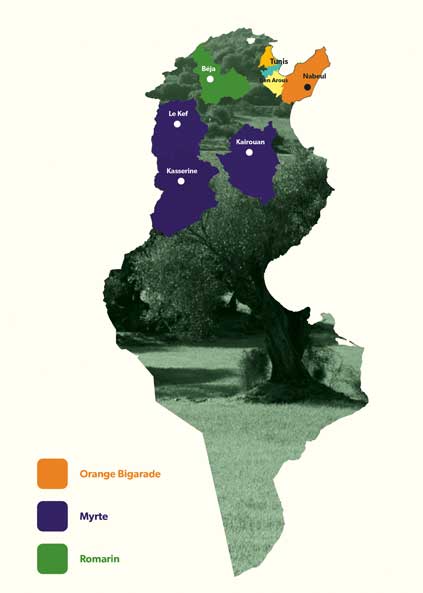